What is smart money?
Connected individuals, syndicates and all round smarty-pants will generally get involved in a betting market when they determine a price is good value. The imbalance of the weight of money in the market will result in the price shortening (steaming), whilst the alternative outcomes in the market will lengthen (drift) to balance the book. The process in which a price shortens significantly is colloquially known as “Smart Money”. The change in the odds is known as the delta change. 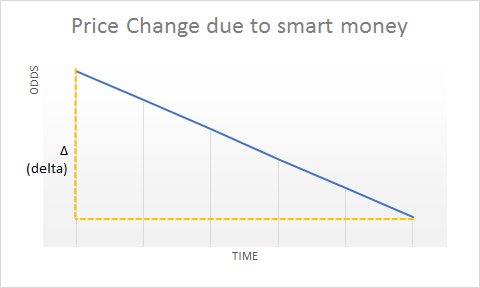 Why is it smart?
The early prices in a betting market are developed with a limited amount of information. As the event start-time nears, more information becomes available which shapes the fair price of the probability of the outcome occurring. Markets become more liquid and more efficient the closer to the start of the event. This is best witnessed on the exchanges, a lot of smart money will shape the price into the best reflection of the probability of an outcome. When the price changes on the exchange, the bookmakers will follow and adjust their prices accordingly.

Why bet on it?
The theory goes that smart money is shaping the market due to information that specialists have determined. If a Portuguese Segunda Youth expert has determined that the Youth Player surprisingly included in Cova Piedade’s starting XI has the potential to dramatically improve the probability of the team winning the game then who are we to argue? Blindly following smart money has its advantages as we can follow all of the experts in more games than we could possibly study on an individual basis.

But how Smart is it? Could it turn a profit?

Betting on Smart Money 2013/14 to 2017/2018 seasons with a Time Machine
Following an (excellent) analytical theory by Joseph Buchdahl (“Do Steamers provide an edge? Analysis from the English 1×2 football betting market”, 2014) I obtained the early prices of all Premiership, Championship, League 1, League 2 and National League games from the 2013/14 season to the 2017/18 season. The early prices were from Tuesdays and Fridays before the game, with an average of up to 57 bookmakers at any one time. I then obtained the closing price, and compared the delta change of every match.

I determined 8,265 matches where the price steamed in. By cross referencing these against the result of the match, I calculated a profit/loss from betting to a strategy of £100 liability on the win for every steamer.

I categorised the steamers into 1% bands, with 783 matches exhibiting extreme amounts of delta price change where the closing price was over 10% lower than the early price. The biggest steam was Manchester City vs Brighton on Wednesday 9th May 2018. The price for Brighton was 21.8 (average price at 43 bookmakers) on the Tuesday, and the closing price on Wednesday was 15.25. City won 3-1 with goals from Danilo, Silva and Fernandinho – so the smart money didn’t get that one right.

Time Machine Strategy 1: Betting on all steamers over 5%

Its impractical to bet at the Early Price on steamers over x% delta price change because there is no way of knowing what x will be before the closing price. Dismissing this lapse in logic for one second (due to our Flux Capacitor), employing this strategy would have yielded the following results:

Time Machine Strategy 2: Betting on steamers between 0% and 5%

It is noted that betting on large steamers at closing profit yields the worst average return price. This may suggest that teams that shorten the most tend to over-compensate and the price contracts too much. 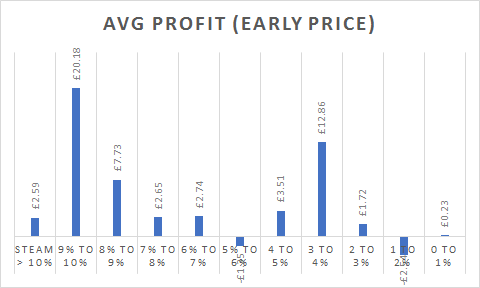 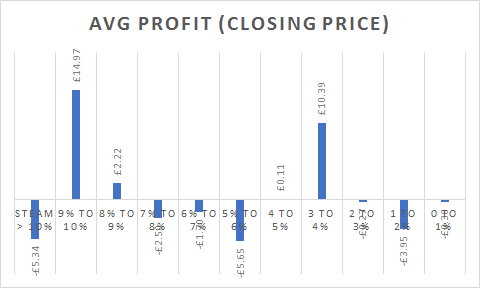 It is noted from the 2013-2018 analysis that teams that steam 5-10% yield less profit than those that steam 0-5%. This is somewhat irrelevant in the application of any strategy going forwards as it is impossible to know the delta change of any price before the closing price is reached and no more bets are taken. Therefore a strategy was developed to bet on any and all potential steamers across UK and Europe and to ignore the difficult task of attempting to estimate the delta price change (Occams Razor).

To follow smart money across the UK leagues and Europe, we identified a number of shop coupons that provided value (in terms of Early Prices) where we may be able to get early prices after identifying teams that have the potential to steam in with Smart Money. We placed a number of combinations of bets on these teams in the form of trebles; this has the dual benefit of compounding equity within each treble whilst distancing ourselves from arbitrage players and the restrictions that are inevitably applied to them (since it is not possible to hedge the majority of trebles).

The bets are tracked and monitored each week at bookiebashing.net and teams that are beginning to attract Smart Money are displayed on a table. An example of the tracker is below 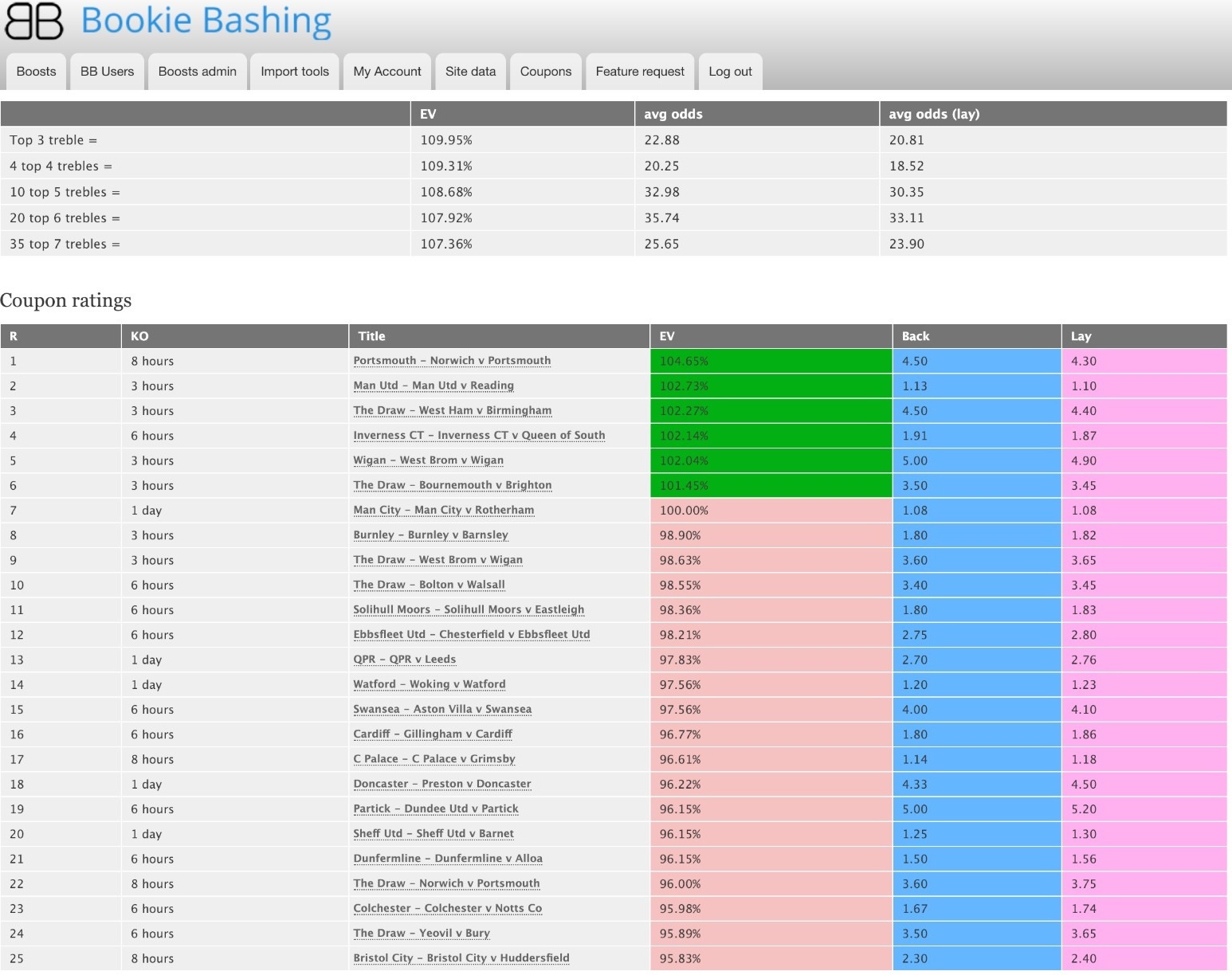 As of (8th January 2018), we have placed 483 bets. Each bet will include multiple trebles with 4-12 teams on one betslip. The strategy of following smart money has yielded 6 consecutive months of profit. Net profit is £69,513 with 57% of the season complete. 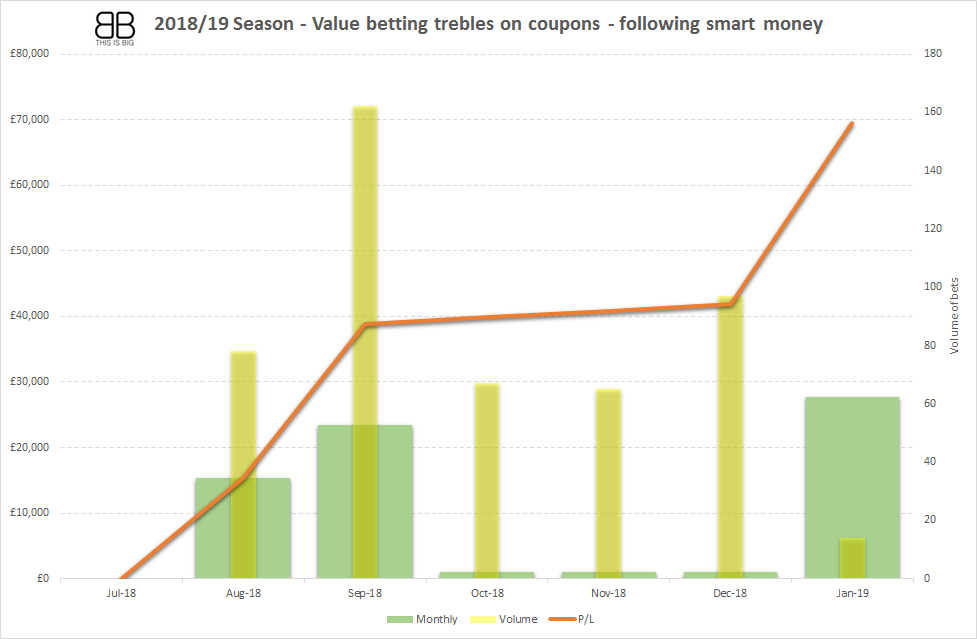 This included a betslip on the third round of the FA Cup that identified Brighton, Portsmouth and Maidenhead to win (amongst other teams) – a bet that came in at 122/1 with a closing price of 75/1 and contributed to a betslip returning £13,200 profit. This example is exceptional, however it is highlighted as the most profitable example of the application of following Smart Money on the 18/19 football season.