Estimating Both Teams to Score in Andorra v England

The Game Centre – a background

The Game Centre at BookieBashing.net estimates the “Fair Odds” of all goal related markets in a football game. It can be used for benchmarking bets at the bookmaker, or trading on the exchange.

It is a unique tool – our methodology is to build a correct score for each game using Match and Team xG from our Daily xG database. We then apply a straight Poisson distribution for each score permutation from 0-0 to 20-20.

We apply a 0-0 bias to this market by directly hinging every correct score option against the fair odds on a liquid correct score or correct score 2 market. The remaining probability is redistributed amongst the market using a weighted utility function so that we always normalise to a sum of 100%.

This way, we can calculate goals related markets without the need for any liquidity, with confidence that our numbers would match the markets if they were liquid and without bias.

A good way to evaluate the accuracy of a tool like the Game Centre is to assess the Fair Odds against the closing lines – both at scale and also in individual games. The more difficult the game to model, the better.

Step forward Andorra vs England, a one-sided affair on the 9th October 2021. England were 1.02 and Andorra 200 on the exchange. Modelling games like this has challenges:

At 8am the secondary exchange markets were illiquid. We calculated the following on the Game Centre for this match:

The secondary exchange markets cannot be used to benchmark with reliability on a game like this. The smart money couldn’t settle on a price all day. Strange things were happening – at one point you could arb the exchange against itself, backing BTTS at 7 and laying England to win and BTTS at 6 for many hundreds of pounds – and a big payday if its 1-1, 2-2, 2-1 etc.

The sense we were applying is that we were building a correct score market ourselves, from 0-0 to 20-20. We were counting up BTTS and England win and BTTS from first principles, with zero bias.

If we take the position that the Game Centre is a hybrid model that can estimate fair odds with a reasonable degree of accuracy, then the prices for BTTS and England win and BTTS were too high on the exchange. They could be backed and traded on the exchange on the assumption they were biased or had been calculated wrongly by the exchange traders – and that the closing price will be much lower.

1945: Closing Prices for Andorra vs England

The Match Odds did not move with any relevance throughout the day, England remained 1.02 and Andorra 200-250 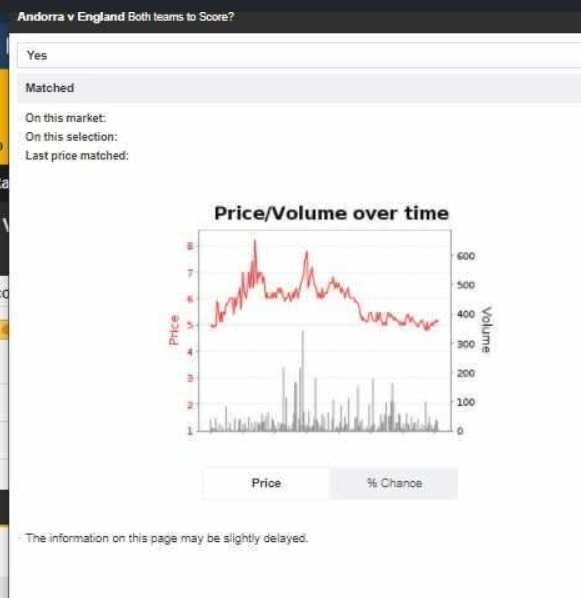 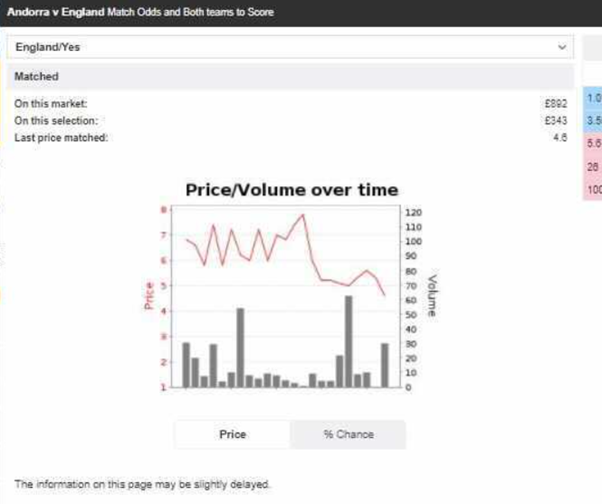 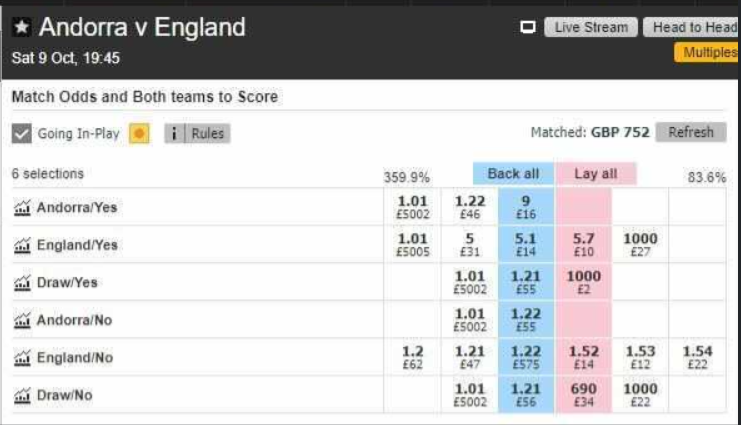 Backing BTTS at 7-8 on the exchange at the beginning of the day would have beaten the closing line and resulted in a 163% EV bet.

We recommend using the Game Centre for benchmarking bookmaker bets and trading on the exchange. Using a hybrid model that builds correct score markets from in-house xG lines and then adjusts to information from smart money allows us to provide a powerful tool for advantage players to beat the markets.