The Bookiebashing Game Centre calculates the correct score for any time period in a game. It does this by using the team xG (see detailed games) and a goal by time period split (see the Sports Strategies). The game centre is a hybrid model – it considers smart money by hinging any scoreline against a liquid exchange and then uses a weighted poisson distribution on xG to determine the remaining scorelines up to 20-20 (Full Time) or 10-10 (Half Time).

In July 2020 we started pushing +EV “Win Both Halves” bets from the Game Centre calculations to the main tracker.

In January 2021 (after a particularly brutal run of results) we were asked to report on the ROI of “Win Both Halves” bets. Our response was that we wanted to wait until we had a sample size of 1,000 bets. 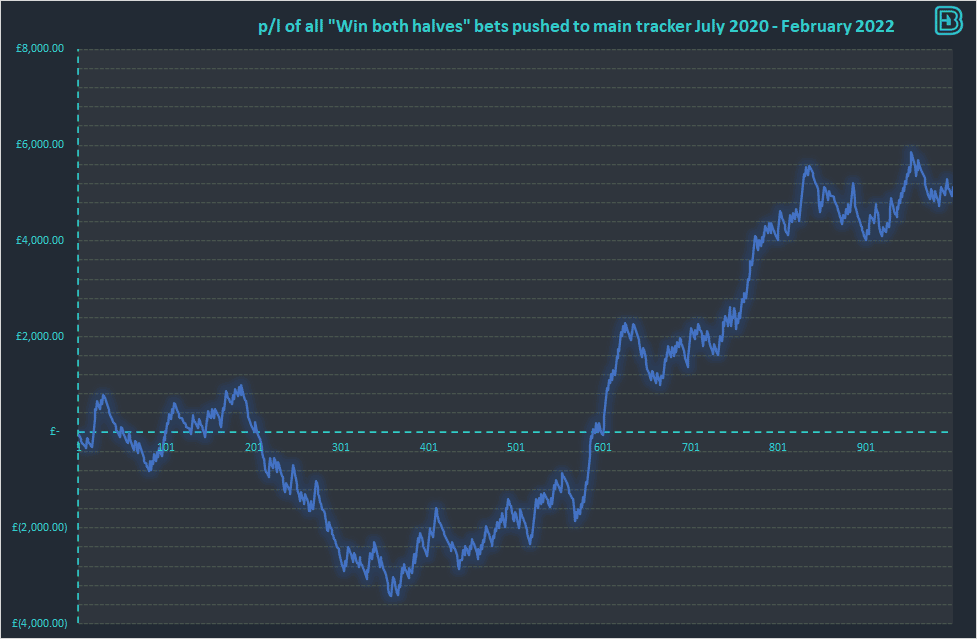 It is worth noting that by the end of January 2021 the ROI of “Win Both Halves” bets was -7.5%. This coincided with a dramatic reduction in the quantity of goals through the lockdown period at the end of 2020 and beginning of 2021.

It would be possible to enhance the game centre calculation through the inclusion of “scenarios” – such as events where a team may want to protect a lead. For example – in a cup match an underdog may be leading at half time. In this scenario they very well may “park the bus” and at half time their second half goal expectation changes to reflect the fact they took off both strikers and subbed on a couple of centre backs.

To calculate scenarios we would need to add Markov Chains to the Game Centre. Markov Chains will break down the game into small segments, and the goal expectation in each segment will be related to the outcome of the previous segment.

Would this enhance the Game Centre?

Do we believe the current Game Centre calculations are “good enough” and fit for the purpose of betting the vast majority of games and trading on the exchange?

In calculations with the product of 2 or more time periods we would always recommend using a personal review of the particular game and asking ourselves – is there any reason for the team in question to want to protect a lead they have at half time? For most favourites the answer will be “no”, other than rare events like Champions League or World Cup Finals. For most cup and league games, the affect will be minimal.