Quantifying the risk of a Player not starting

Bookmaker and Exchange rules state that:

Team news occurs one hour before Kick Off. Therefore when we bet before team news there is a risk that our player does not start, and this has a tangible affect on the value of our Player bets.

We can assign a subjective probability to the chances of a player starting. All of this will be guesswork – only a handful of people will know the lineup ahead of team news, and even then this will be subject to change and warm-up injury. We can get expected lineups from a number of different sources, such as whoscored.com, four four two magazine, rotowire, fantasyfootballscount.co.uk etc.

Before team news the probability of a player starting will have an affect on the xG of the player. If a player doesn’t start and takes no part of the game then the EV calculation is inconsequential; all bets are void and we neither win or lose EV.

Lets assume that a basic calculation for Player xG has already been made for the game (see previous blog on calculating Player xG). If a player starts then then we can assume their expected goals per minute (xG per minute) by estimating their playing time before being substituted.

Player starts on the substitute bench

If a player starts on the bench we can similarly estimate their expected playing time. With the xG per minute from the table above we can now estimate a new Player xG given the player starts on the bench. (Note that in this table I have used a simplified methodology where I have assumed a uniform number of goals is scored in each minute of a match. We could further enhance these numbers by considering the fact that a higher frequency of goals is scored later on in the game)

In the table above we can see that substitutes have a significantly higher AGS price with the same xG per minute. This price can be observed on the exchange pre-team news as these prices need to factor in a “risk of not starting”. However this risk will not be observed at the bookmaker.

Lets assume a player has fair odds of 2.0 for scoring in a full match of 95 minutes. The graph below shows the probability of the same player scoring based on a range of playing times: 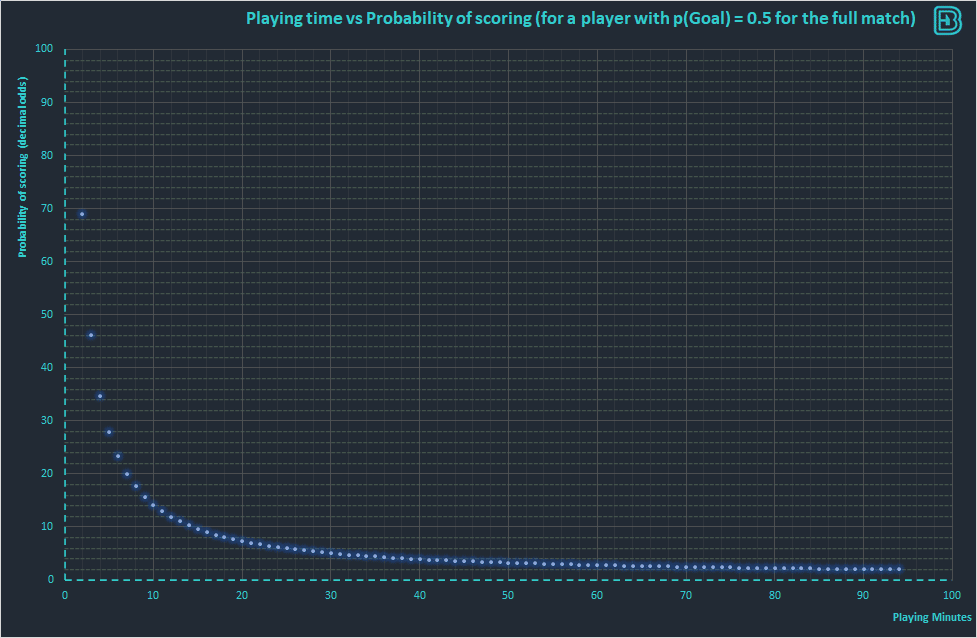 We can combine the expected Player goals in the two tables above by a weighted function that is based on their expected playing time and the probability of them starting in the game / starting on the bench. The overall risk of not starting can therefore be quantified into the AGS price (and similarly into prices such as Shots on Target) by:

The table below shows an example of this process with varying degrees of probability that a player starts:

We can mitigate the risk of a player not starting by